Do away with Antoo Fighters- Amukan Drakulat, and even Harry Potter. Bring me Edward Cullen to feast my eyes upon. Who, says you? Oh… I’m talking about Twilight the movie main character, Edward Cullen, a dashingly handsome immortal vampire who fell for a mortal human girl, Bella Swan.

Twilight is not well advertised in Malaysia, and I am more than sure then when it hit Malaysian cinema on 27th November, six days more late than the actual release, it’ll be censored like hell. Typically Malaysian. Anyway, I don’t always do review on movies unless I am really into the movie in question. And in this case, I’m really into the movie. I have been anticipating the movie for quite some time now since I read the Twilight Saga by Stephanie Meyer.

Yes, folks, Twilight is adapted from a novel. Stephanie Meyer may not be as well known as J.K. Rowling, but her masterpiece breathe new insight in paranormal romance. In Twilight world, vampires are not the conventional kind, they can mix around with humans and feast on animal blood, and no, sunlight do not kill them or make them explode either. Twilight Saga consist of four books, which is Twilight, New Moon, Eclipse and Breaking Dawn. A good read if you want something paranormal but won’t make you scream out of fright. Romantic too.

Here’s some summary on the books for those who are interested. I have e-books version of these, so if you would like a copy of any of these, kindly email me at cleffairy@gmail.com and request for it, I’ll be pleased to send it to you.

Bella Swan’s move to Forks could have been the most boring move she ever made. But when she meets the mysterious and alluring Edward Cullen, her life takes a thrilling and terrifying turn. Up until now, Edward has managed to keep his vampire identity a secret in the small community he lives in, but now nobody is safe, especially Bella.

Star-crossed lovers Bella and Edward return find themselves facing new obstacles, including a devastating separation, the mysterious appearance of dangerous wolves roaming the forest in Forks, a terrifying threat of revenge from a female vampire, and a deliciously sinister encounter with Italy’s reigning royal family of vampires, the Volturi.

As Seattle is ravaged by a string of mysterious killings and a malicious vampire continues her quest for revenge, Bella once again finds herself surrounded by danger. In the midst of it all, she is forced to choose between her love for Edward and her friendship with Jacob — knowing that her decision has the potential to ignite the ageless struggle between vampire and werewolf. With her graduation quickly approaching, Bella has one more decision to make: life or death. But which is which?

Pulled in one direction by her intense passion for Edward Cullen, and in another by her profound connection to Jacob Black, Bella Swan has endured a tumultuous year of temptation, loss, and strife to reach the ultimate turning point. Now that Bella has made her decision, a startling chain of unprecedented events is about to unfold with potentially devastating and unfathomable consequences.

And here comes the movie summary: ( Please note that the movie was released earlier, on 21st November 2008 instead of 12th December 2008)

In Twilight the movie, Bella Swan has always been a little bit different. Never one to run with the crowd, Bella never cared about fitting in with the trendy, plastic girls at her Phoenix, Arizona high school. When her mother remarried and Bella chooses to live with her father in the rainy little town of Forks, Washington, she didn’t expect much of anything to change. But things do change when she meets the mysterious and dazzlingly beautiful Edward Cullen. For Edward is nothing like any boy she’s ever met. He’s nothing like anyone she’s ever met, period. He’s intelligent and witty, and he seems to see straight into her soul.

In no time at all, they are swept up in a passionate and decidedly unorthodox romance – unorthodox because Edward really isn’t like the other boys. He can run faster than a mountain lion. He can stop a moving car with his bare hands. And not to mention climb trees swiftly.

Oh, and he hasn’t aged since 1918. Like all vampires, he’s immortal. That’s right – vampire. But he doesn’t have fangs – that’s just in the movies. And he doesn’t drink human blood, though Edward and his family are unique among vampires in that lifestyle choice.

To Edward, Bella is that thing he has waited 90 years for – a soul mate. But the closer they get, the more Edward must struggle to resist the primal pull of her scent, which could send him into an uncontrollable frenzy. Somehow or other, they will have to manage their unmanageable love. 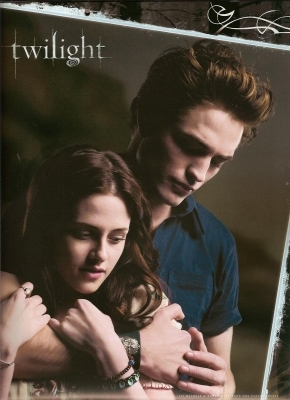 But when unexpected visitors come to town and realize that there is a human among them Edward must fight to save Bella? A modern, visual, and visceral Romeo and Juliet story of the ultimate forbidden love affair – between vampire and mortal.

If you’re interested in the trailer, you can watch it here:

However, if you’re interested in watching the entire movie, cinema version, go here:

I’m a sucker for classical music, so I was pleased that they used the classic song, Clair De Lune by Debussy as part of their movie soundtrack. I’m not a Claude Debussy fan, though. But I think it’s appropriate enough, considering the meaning of the song, which is moonlight. Sufficient enough for a vampire movie, I guess. Perhaps when I’m free, I’ll write something about Clair De Lune.

On the lighter note, yours truly have a confession to make. I originally anticipate a scene from the novel where Edward plays the lullaby that he composed for Bella. It’s supposed to be a beautiful and soothing melody, and fans all around were hoping that it would be this one. ‘River Flow In You’ by Yiruma. The very same pianist used for Winter Sonata.

River Flow In You by Yiruma

However, they came out with this one, Bella’s lullaby by Carter Burwell. To say that I was aghast to see the scene was an understatement. I almost snarl in disappointment with the production’s decision to use this kind of music as a lullaby. It simply does not reflect what’s described in the novel. If you guys could find some time to listen to the music, do tell me what you think about it.

I would recommend you guys to read the novel first, then the movie. Personally, I prefer the novel more than the movie to fully enjoy the story and the character’s development process, but then again, I have hots for hunky, romantic and dangerous guys, so that explains why I anticipate the movie so much.

But if you’re not an avid reader the movie is worth a shot if you want something different. It’s Pg-13, though, not suitable for children.

Cleffairy: When you can live forever, what do you live for?